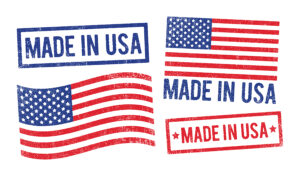 What to Know About Country of Origin Marking

To some, “Country of Origin Marking” might sound like it’s simply a marking that shows the county where a product originated. However, it is much more than that.

When importing a foreign product into the United States, it is critical to follow all the requirements about the placement, wording, and format of the Country of Origin Marking.

For placement, the Country of Origin Marking must be located in a conspicuous place, and must be able to be seen during casual handling of the item. It should be in a place where it cannot be covered or concealed, and where it can be viewed without disassembling, removing, or changing any parts of the item. The marking does not necessarily have to be permanent, as the nature of some products will not permit this, but it should be as permanent as possible and should remain on the product throughout all handling. The Country of Origin Marking must also be legible, which means it should be of adequate size and clear enough to be easily read by a person with normal vision.

There are also some requirements about the wording of the Country of Origin Marking. As stated above, it must state where the product originated, and “country” refers to a political entity known as a nation, while colonies, possessions, and protectorates may be considered separate countries. On the Country of Origin Marking, the name of the country may be abbreviated, but only when it unmistakably indicates the name of the country. For example, “Gt. Britain” would be a permissible abbreviation for Great Britain. The marking should be in English, though variant spellings that clearly indicate the English name, like “Italie” instead of Italy, are still acceptable. If the abbreviation might cause confusion, the name of the country should be fully spelled out.

Finally, anyone importing a product into the United States should be clear on the acceptable forms of a Country of Origin Marking. For marking the product, the best forms are ones that are part of the item themselves, including:

Tags are also acceptable, though they must be placed in a way that ensures they will stay in place. Similarly, adhesive labels may also be used, though it is not recommended since they can easily come off.

The informed compliance publication also includes more details on general information and special types of markings, and provides all the information of Country of Origin Marking to know before importing a product into the United States.

This content is intended for informational purposes. Due to the generality of this content, the provided information may not be applicable in all situations. We encourage the reader to review the most up-date-regulations directly with the U.S. government’s sources on Country of Origin Marking, which can be found here.