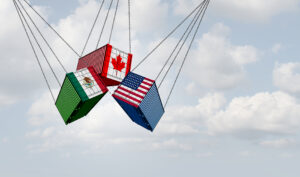 Understanding the Main Differences Between USMCA and NAFTA

On July 1st, 2020, the United States-Mexico-Canada Agreement (USMCA) went into effect. It replaces the previous free trade agreement between the three countries, the North American Free Trade Agreement (NAFTA), and has been lauded by some as a new-and-improved version of NAFTA. Here’s what to know about USMCA and a few key differences between it and NAFTA.

USMCA, agreed upon by United States president Donald Trump, Canadian Prime Minister Justin Trudeau, and Mexican president Enrique Peña Nieto, was signed in 2019 and went into effect this year. It supports mutually beneficial trade between the three countries, and aims to create a freer market, fairer trade, and a more robust economy throughout all of North America.

In this sense, USMCA is similar to NAFTA, which went into effect in 1994. NAFTA aimed to increase trade, economics, and opportunities across North America, and brought great growth and changes to industries in all three countries. However, there are some significant differences between USMCA and NAFTA which may make USMCA become stronger and more successful than NAFTA.

For starters, USMCA provides some much-needed updates on areas like technology and digital trade. For instance, it includes details that prohibit Canada and Mexico from forcing American companies to store their data on in-county servers, a provision that was not included in the 1994 agreement. The technology and digital sectors have grown exponentially since 1994, and the new agreement takes steps to ensure that these industries stay safe and fair. Similarly, USMCA also includes a heavier focus on environmental protection than NAFTA did, as environmental concerns are also greater now than they were in 1994. The new agreement provides $600 million to address environmental concerns in North America, and makes environmental regulations easier to enforce.

USMCA also improves upon some facets of NAFTA. It strengthens automobile sales and jobs by requiring that 75% of a vehicle’s parts must be manufactured in the United States, Canada, or Mexico, while NAFTA only required that 62.5% of a vehicle’s parts be manufactured within North America. It also strengths the agricultural trade agreements established by NAFTA. Like NAFTA, USMCA keeps tariffs at zero on most agricultural products, and also allows for increased agricultural trade between the United States and Canada. Under USMCA, Canada will allow more America dairy, poultry, and eggs to cross the border into their market, while the United States will receive more Canadian dairy, peanuts, peanut products, and limited amounts of sugar.

Finally, USMCA will strengthen labor laws in North America. One main criticism of NAFTA in the United States was that it sent too many jobs to Mexico, where wages are lower. USMCA includes language to prevent this, which will increase jobs in the United States and level the playing field to create fairer opportunities for American workers. USMCA also includes provisions for an interagency committee to monitor labor reform implementation in Mexico to ensure that labor standards are enforced.

This content is intended for informational purposes. Due to the generality of this content, the provided information may not be applicable in all situations. We encourage the reader to review the most up-date-regulations directly with the U.S. government’s sources on USMCA, which can be found here.